The two years following the Harvard fellowship were primarily taken up with teaching. I was, however, able to cull another video installation piece out of work I had done on Turnaround Time.

The qualities that make this installation beautiful also make it impossible to photograph. The below images are stills from videos projected onto invisible scrims. In the installation these images seem to hove in mid-air, one behind the other, with a four foot separation. This separation gives the effect of great depth to the space and an eerie sense of distance in time. (see detailed description below) 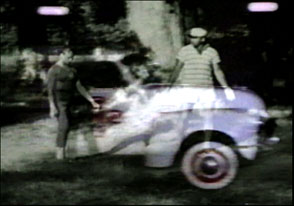 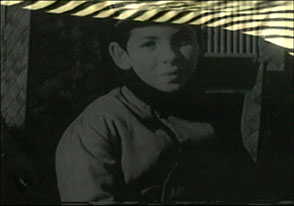 Two invisible gauze screens are separated by about four feet and projected on from both front and rear (see diagram). The result is four superimposed images that seem to hover hauntingly in thin air and that spill over onto the ceiling and walls surrounding the viewer; creating an effect of great depth and a visceral sensation of envelopment. The insubstantial and receding images seem to exist not in a distant space but a distant time, making the evocation of memory palpable. Images taken from both home video and commercial film allude to the way that memory is reconstituted from available material, public and private and the blurring of these sources in memory. The interplay of images at different depths seems to play out a poetic conversation between moments in time. A thicket of sound, both exotic and everyday(sprinklers, cars, children playing, conversation, carnival noises, fragments of song), are heard from a distance. The farawayness of the sounds evokes distant time in concert with the receding depth of the video montage. The rich relationships between images and sounds makes this (for me) an exceptionally painterly installation.

The following text is placed near the entrance of the installation:

and that ungentle darkness opening
gathered our falling like cupped hands*

See a review of this work
Proceed to the next group of work - Home Improvement, a return to painting 2002
Return to Index of Art
Return Home