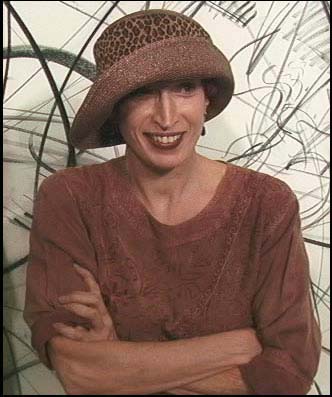 One fact of my life illuminates an understanding of my work perhaps more than anything else. I was raised as a Jehovah's Witness and I was a fervent young believer. The beliefs of Jehovah's Witnesses are spoken of as "the truth." One comes into "the truth" at about age 14, full of adolescent angst. As it happened with me, I slid out of "the truth." Thus, a great part of my young adulthood was spent coming to terms with this defection. My choice of physics as my initial college major was prompted by a need to re-ground my understanding of reality, as was my subsequent shift to art as a way to enfold personal experience into the process of coming to grips with what I believed.

In the course of my graduate studies in art I chose to focus my attention on spatial experience. My last year of graduate school and the following several years were spent observing and recording my experience of space. I have come to think of spatial experience as a powerful underlying vocabulary for our mental processes, including language. Space is the palpable medium of our existence and the framework into which we graph the data of experience. My studies have pursued spatial perception, but also the poetics and vocabularies of spatial representation and, more recently, the role of space in organizing thought.

At this stage in my life I am quite at peace with my relationship with "the truth." But my appetite for "sounding" experience to the greatest depth possible has steadily increased. My study of space/experience has led to a recent fascination with illusion as a way of plumbing the interpretive powers of the mind. My upbringing provided first-hand experience of the power of illusion.

I see our experience as drenched in illusion at every level: from the subatomic level where a number of physicists begin to suspect that there is, in fact, no there there; that material reality may not, purely speaking, exist; to the more everyday ways that the power of illusion molds our experience of the world. We regularly perceive and believe in things that, like phantom limbs, are generated from within. These powers are important for our survival and allow us to do things we would otherwise not be able to do. Without visualization the basketball would rarely meet the basket. But as jihadists strap bombs on their bodies to get to heaven and ideologues of all stripes increasingly dictate the terms of our reality, it becomes imperative to understand the nature of our illusions. By means of these illusions we reach into the depths of our potential, for both good and ill.

In 2002 I returned to painting after several years teaching and working with digital media (primarily video installation). I have been using the computer together with a large format printer to combine objects and materials with photographs of the same, in such a way as to confound the viewer as to which is which. In recent work I have begun to insert myself in between, making more explicit the role/relation of the observer to the observed.

In the coming year (2007-2008) I will be translating these concerns into video installations for upcoming shows at Pyramid Atlantic in Silver Spring and the Katzen Center for the Arts in Spring '08.

I graduated from the University of California at Santa Cruz and then went on for an MFA in painting from the University of Pennsylvania in 1985, and later earned a second MFA from the University of Maryland in digital media. My paintings have been included in the Corcoran Museum's prestigious biannual survey of American painting in 1993. Around that time I began to explore issues in other media. While working at the University of Maryland my casual collaboration with Gillian Brown became more formal as we worked together on two major video installation projects. In 1999 we were awarded a fellowship from Harvard University, where we worked for a year on a technically and conceptually complex interactive video installation, Turnaround Time. In 2002, after two years teaching at Stetson University in Florida, I returned home to Washington DC.

My work is held in collections which include the San Francisco Museum of Art, the Corcoran Museum, the National Museum of Women in the Arts, the Gap Collection, the Artery Collection and others. It has been often reviewed in the Washington Post as well as the San Francisco Chronicle, Boston Globe, Art in America, Art Papers, and other publications. It has been reproduced in books and catalogs, most recently in a scholarly German survey of new media art, Grundkurs Kunst 4: Aktion, Kinetik, Neue Medien, by Michael Klant. I have taught art at University of Pennsylvania, University of California at Santa Cruz and University of Maryland, and taught digital art at the Art Institute of Phoenix and Stetson University.